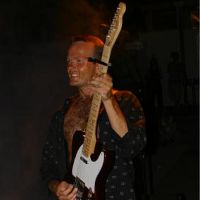 Vemund is the man behind Hercules' music, meaning he is the songwriter and composer in the band. Starting to play the guitar at the age of ten, and handling the lead vocals and lead guitar, he is very much the cornerstone and frontman of Hercules.

His songs have earned the band a good reputation worldwide, and his natural and melodic voice has been described as a mixture between Tom Petty, Francis Rossi and Aslag Haugen, that suits perfectly with the bands powerful sound.